By Kasper Sulkjær Andersen
This article is a part of a master's thesis from 2013.

APPENDIX A – TRACING CHINA’S CLIMATE POLICY
The present appendix provides a detailed description of the evolution in China’s climate policy in the period from 2001-2012. Within this time period particular points in time are more significant than others. In the present context, the period between 2006-2009 represents the main watershed in China’s climate policy as this period was marked by the launch if the 11th FYP, as well as the first Chinese attempt to formulate a coherent and coordinated climate policy captured in the 2007 government white paper called China’s National Climate Change Programme. Likewise, such efforts were complemented by the 2009 announcement of ambitious carbon intensity targets just prior to China’s participation in the COP15. Thus, where the period between 2001-2005 was characterised by a largely ‘unambitious’188 Chinese climate policy the period after 2005, starting with the launch of the 11th Five Year Plan (2006), in contrast, has exhibited a qualitative shift towards an increasingly proactive domestic stance on climate change (see Figure 8.0). 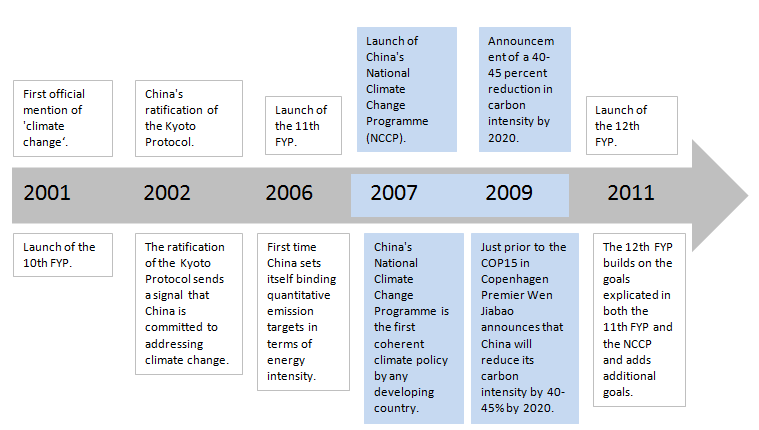 8.1 BEFORE: 2001-2005
In the period leading up to the shift in China’s climate policy, climate change as a policy issue was generally regarded as low politics (He, 2010:16) and had yet to be disentangled from wider concerns regarding the rapidly deteriorating Chinese environment caused by double-digit economic growth. Thus, in the period before the shift in climate policy climate change was still very much perceived as embedded within the wider context of energy politics and not as an issue in its own right. Also, scepticism about the certainty of climate change had yet to fully subside and the notion that regulation in the realm of climate change was an expression of “environmental imperialism” (Yu, 2008:57) had yet to be replaced with a notion that (pro-) action would serve China’s self-interest. The 10th five year plan (FYP) launched in December 2001 made clear headway in this regard by establishing a tighter link between China’s rapid economic growth and its deteriorating environment. Although the overriding focus was on energy conservation (in order to slow down overall energy growth), environmental protection and a reduction of pollution (SEPA, 2002) signs could be observed that climate change was about to shift as a policy issue. Despite the fact, that climate change was only mentioned once in passing in this FYP in “(...) affirmation of China’s active participation in global environmental and developing issues (...)” (Stensdal, 2012a:7) it was, however, the first official mention of climate change in any FYP (Ibid:7) and thus signified the eminent change that would propel climate change up the policy ladder (He, 2010:16). Importantly, shortly after the launch of the 10th FYP China ratified the Kyoto Protocol in 2002 which further supported climate change as an independent policy issue. The elevation of climate change politics was further consolidated by the 2003 launch of the ‘scientific development concept’ introduced by President Hu Jintao in a speech in Jiangxi Province. This concept made considerable headway in leapfrogging the climate change issue up the national policy ladder due to the compatibility between climate change and the scientific development concept’s emphasis on sustainable development. The Chinese leadership was by 2001-2002 slowly beginning to realise that economic development involves more than securing double-digit growth rates. Importantly, the single-minded focus on growth had exacerbated existing economic inequalities and taken a considerable toll on the Chinese natural environment. In this light, the scientific policy concept became the solution to this single-minded focus on growth by introducing a more balanced growth paradigm where upgrading the importance of the environment became one of several possible strategies for securing a more sustainable growth path (Fewsmith, 2004).

8.2 DURING: 2006-2010
The 2006 launch of the 11th FYP further paved the way for climate change to be elevated to national priority and assume policy credentials in its own right. The focus of this FYP was to moderate the one-sided focus on attaining high economic growth at all costs by encompassing a wider scope of national priorities. China scholar Cindy Fan (2006:709) notes that the 11th FYP marked the shift from Deng Xiaoping’s famous slogan of “getting rich first” to a more moderate development strategy of “common prosperity” or “harmonious socialist society”189. The new development objective of the Chinese Communist Party (CCP) was to develop an “all-around well-off” Chinese society through a sustainable development growth strategy (Ibid:709). Climate change as a policy issue fitted well with this reorganisation of the Chinese development philosophy. In an official government strategy paper the following passage can be found which underscores the importance of the role played by climate change in China’s new development strategy: “Address climate change in the context of sustainable development. Climate change arises out of development, and should thus be solved along with development” (State Council, 2008:11). Speaking at China’s 17th Party Congress in 2007 President Hu Jintao further underscored the importance of addressing climate change by emphasising that:

Adhering to the basic state policy of conserving resources and the environment is vital to the immediate interests of the people and the survival and development of the Chinese nation. We must give prominence to building a resource-conserving, environment-friendly society in our strategy for industrialization and modernization and get every organization and family to act accordingly. We will enhance our capacity to respond to climate change and make new contributions to protecting the global climate190.
In terms of quantitative targets191, the 11th FYP sets unprecedented ambitious targets in terms of mitigating both environmental problems and climate change. Particularly, the two compulsory targets of reducing energy intensity192 by 20 percent and reducing the emission of major pollutants by 10 percent from their 2005 levels respectively represent the cornerstone of this plan. Other targets, although not compulsory, included increasing the share of renewable energy in the overall energy mix from 10 percent by 2010, from the current 7 percent, and to 15 percent by 2020, as well as efforts aimed at reforestation, and the protection of the ecological environment.

The 2007 launch of the National Climate Change Programme (NCCP) builds on the ambitions outlined in the 11th FYP. The NCCP is the first attempt by any developing country to formulate a coherent climate policy (Hallding et. al., 2009). The overall goal of the NCCP was to:

The ambitions in China’s climate policy further developed as Premier Wen Jiabao in 2009, prior to the COP15 in Copenhagen, announced that China would bring down its carbon intensity193 by 40-45 percent by 2020 from the 2005 level (Jing, 2011) reiterating the point that China was/is willing to help tackle climate change.

8.3 AFTER: 2010-2012
The 12th FYP194 plan published in 2011 marks the period after China’s shift in climate policy. Although we are currently at the very start of the period encompassed by this FYP there is a clear indication that China will continue its efforts in mitigating climate change through additional domestic policies and targets. Among the key targets of the 12th FYP is an additional reduction in energy intensity by 16 percent by 2015. At first glance this target may seem less ambitious than the 20 percent reduction proposed in the 11th FYP, however, achieving this target could very well prove even more daunting than achieving the previous targets due to the fact that China has effectively exhausted its possibilities of quick and easy energy savings through the reduction in large and ‘dirty’ industries (Lewis, 2011). Also of importance is China’s target to increase non-fossil fuel energy by 11.4 percent in the overall energy mix (up from 8.3 percent in 2010).

Join the debate on Appendix A - Tracing China's Climate Policy: